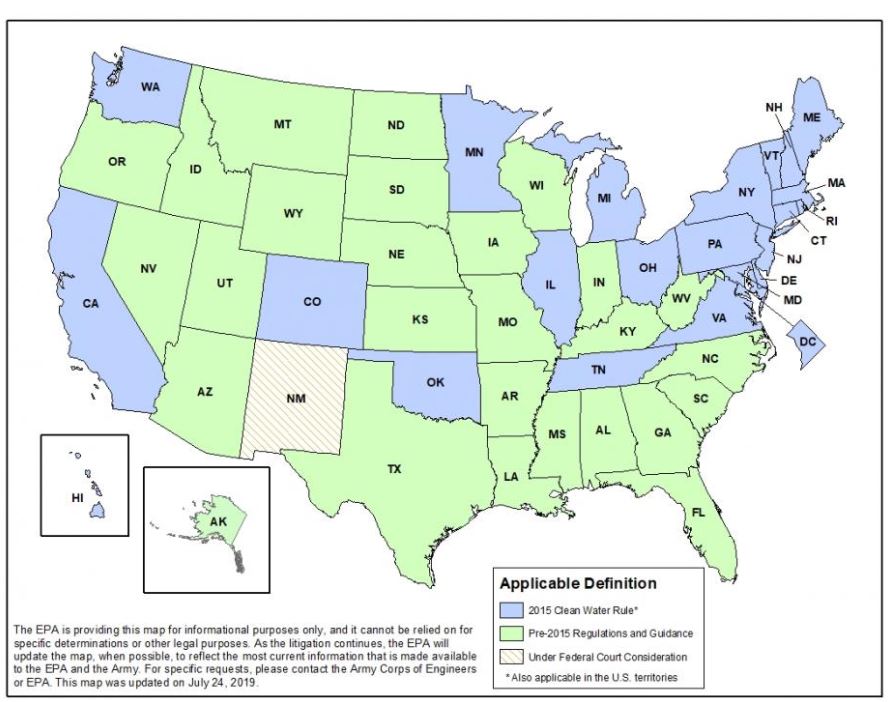 There have been several recent developments in the arena of environmental permitting and regulatory compliance at the Federal level.

On September 12, 2019, the United States Environmental Protection Agency (USEPA) and the  definition of “waters of the United States” primarily for those aquatic features that are in the upper extents of a watershed. The repeal will mean that the USACE and the USEPA will fall back on previous guidance from 2008 to determine jurisdictional boundaries. With the rollback, the jurisdiction of the USACE and the USEPA regarding a specific water body is determined on a case-by-case basis, and in some cases is likely to exclude features that previously would have fallen within the proximity boundary for jurisdictional status. Step 2 of the plan involves the issuance of a new revised guidance and is expected to be announced later this year. It should be noted that only 22 states currently follow the 2015 Clean Water Rule. The remaining 28 (including West Virginia) follow the pre-2015 rule, therefore projects in West Virginia will not be affected by the new rule unless additional changes are made.

Another recent change in environmental permitting and regulatory framework revolves around the Endangered Species Act (ESA), impacting consultations with the United States Fish and Wildlife Service. Protections for “threatened” vs. “endangered” species will be changing, with varying levels that will be determined on a case by case basis, rather than in a blanket manner. Additionally, the criteria for listing a species as threatened or endangered are being re-evaluated with more emphasis placed on the potential economic effects of the listing.

Lastly, consultation requests from the Osage Nation Historic Preservation Office (ONHPO) have begun to filter in for many projects in the Ohio Valley (all counties that are within two counties of the Ohio River). State Historic Preservation Offices (SHPOs) were recently asked by the ONHPO to cc them on a SHPOs response to consultation requests from consultants or other entities. Any Federal agency is required to provide the ONHPO with the requested information. The Environmental Division is diligently working on determining the level of effect this may have on projects.

If you receive a letter from the ONHPO for your project or have any questions about how the current USEPA and ESA changes may affect a project, please feel free to contact Clayton Lilly, Jordan Wilcox, or Gina Panasik in the Environmental Division.